miRNAs function by regulating the expression of targeted mRNAs. While the gene regulation imposed by miRNAs is normally a fine-tuning mechanism, binding of multiple miRNAs to the same mRNA through different target sites can have a large effect on gene function. Furthermore, individual miRNAs can have hundreds of different target mRNAs. This leads to a network of targeting that is non-trivial to comprehend.

Lists of targeted mRNAs will also be used for pathway analysis, since subtle miRNA mediated regulation of multiple genes within a distinct cellular pathway can have large effects on the pathway output.

We can assist the exploration of miRNA targeting where our focus is on miRNA targeting as a network. Target prediction of single miRNAs or a list of miRNAs of interest can be used to detect mRNAs regulated by multiple miRNAs and to produce miRNA-mRNA network plots for visual representation. 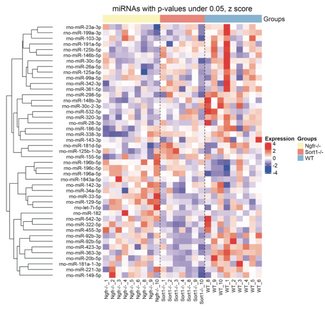 Depending on your needs and results, we will customize a visualization of the mRNA expression. For example, a heatmap of miRNA-mRNA expression clustered by group.

Plot of the enriched pathways for target mRNAs 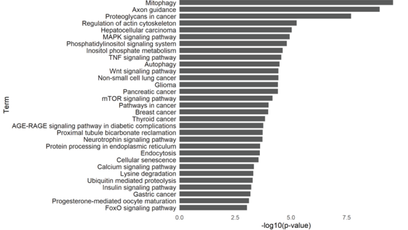 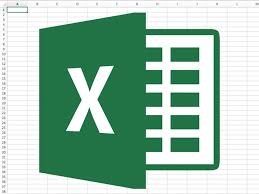 Excel file with predicted targets of miRNA(s) of interest